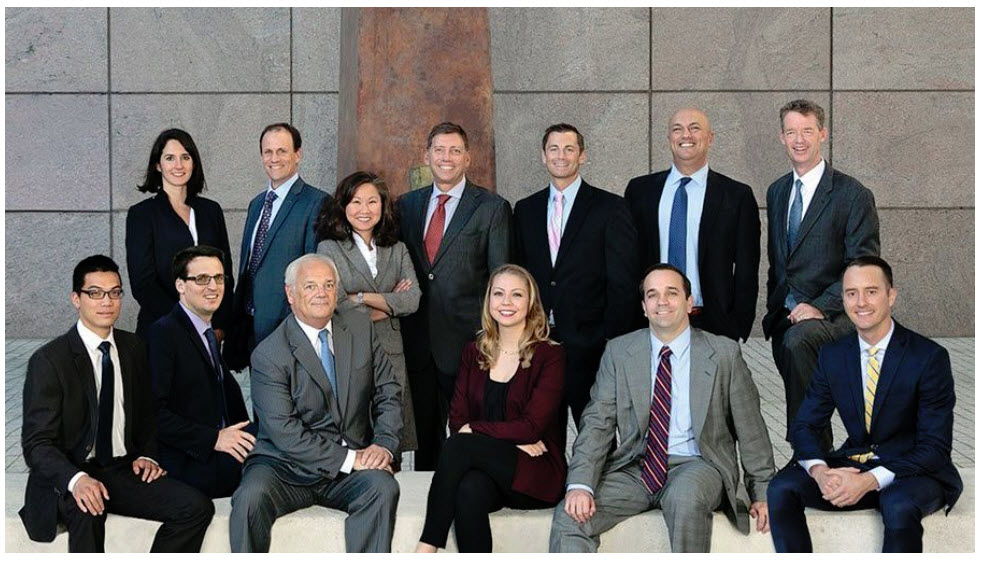 SAN FRANCISCO – Michael A. Kelly ‘76, Richard H. Schoenberger ‘85, and Matthew Davis ‘89 are giants of the personal injury bar. Each has brought countless claims on behalf of plaintiffs injured in traffic collisions, by defective products, on dangerous property, and through government negligence.

Their work inside the courtroom has resulted in multimillion-dollar verdicts and settlements. Outside the courtroom, they have volunteered their time to teach trial advocacy on a national and international basis for decades. And now, the three are coming together to make a lasting impact at their shared alma mater, UC Hastings Law.

“We are proud to be Hastings alums,” say Kelly, Schoenberger and Davis. “The school has been the wind at our backs all of these years. We fully recognize the escalating and sometimes prohibitive costs of the outstanding education Hastings provides. We want others to experience the same academic excellence that we enjoyed and, with this contribution, hope to make it easier for those who have come after us.”

“We are deeply grateful for Kelly, Schoenberger and Davis’s generosity,” said Dean Faigman. “This gift demonstrates their belief in, and commitment to, the UC Hastings mission to be a center of excellence in legal education. This generous gift advances our capacity to prepare leaders – leaders in the molds of Kelly, Schoenberger and Davis – who will one day take on the most pressing and challenging legal issues of the day.”

The gift builds upon strong connections with the law school. In addition to Kelly, Schoenberger and Davis, the renowned firm is home to more than a dozen UC Hastings Law graduates, including shareholders Khaldoun A. Baghdadi ’97, Conor M. Kelly ‘09, and Andrew McDevitt ‘10, associates Max Schuver ‘10, Joseph A. Nicholson ‘12, Christian R. Jagusch ‘15 and Jade Smith-Williams ‘17, and counsel Kevin L. Domecus ‘79. Douglas Saeltzer ‘94, also a shareholder with the firm, is currently an assistant professor at UC Hastings.

A legacy of pride

Kelly, Schoenberger and Davis look back fondly on their time at the law school and credit the training they received as having helped to propel them to the top of their field. “I particularly enjoyed the opportunity to take trial advocacy courses and learn from some of the best professors in the country,” says Schoenberger.

From 1992 through 2001, Davis served as a Deputy City Attorney representing the municipality and its employees in jury trials and appeals in both state and federal Court. In 1999, he served as the lead attorney in suits brought by the City of San Francisco alleging that California’s largest title insurers had defrauded consumers and the government. Those suits resulted in verdicts and settlements totaling more than $75 million.

Schoenberger has received record setting jury verdicts throughout Northern California, been honored as the SFTLA Trial Lawyer of the Year and twice been named Lawyer of the Year by Best Lawyers in America for Personal Injury Litigation – once in 2016, and again in 2019.

In his more than four decades as a lawyer, Kelly has racked up numerous awards and achievements including selection as the California ABOTA Trial Lawyer of the Year in 2014 and selection as a Super Lawyers “Top Ten” honoree for eight of the last ten years. He was selected by Best Lawyers in America as the 2017 Lawyer of the Year in the area of mass torts. He has taught for the National Institute of Trial advocacy since 1985 and served as an adjunct faculty member at UC Hastings from 1981-2000. His commitment to Hastings was inspired by his exposure to the “65 Club” when he was a student. “They were pillars of great inspiration and professional excellence”, says Kelly.

Building toward the future

In recognition of the trio’s generosity, the main lecture hall in the new academic building at 333 Golden Gate Avenue will bear the Walkup, Melodia, Kelly & Schoenberger name.

“There aren’t many law schools that are able to offer the type of innovation, academic rigor and level of hands-on practice that UC Hastings is able to offer its students,” notes Schoenberger. “With the new academic building and continued commitment to excellence, UC Hastings is shaping the future of legal education. We’re proud to support UC Hastings with this foundational gift.”

The new building will house classrooms, clinics, and several administrative offices. It is expected to open for instruction by Spring 2020 and will mark the first step in transforming the UC Hastings campus into an Academic Village.